Pretty, unique, and fairly easy to care for, Oxalis Triangularis is growing increasingly popular with indoor gardening enthusiasts. Also referred to as False Shamrock on account of its triangular leaves, in some parts of the world, this plant is considered a weed.

With this being said, the plant makes a great addition to any interior plant collection. Here’s an Oxalis Triangularis care guide, including how to water Burgundy Shamrock and how to propagate this pretty plant (which is also sometimes referred to as the Love Plant).

There are two common forms/ varieties/ types of Oxalis triangularis. One form is bright green and the other is burgundy/ dark purple in colour. There are also several variegated forms of the purple and green varieties, though these are harder to find and purchase in shops and plant centres. 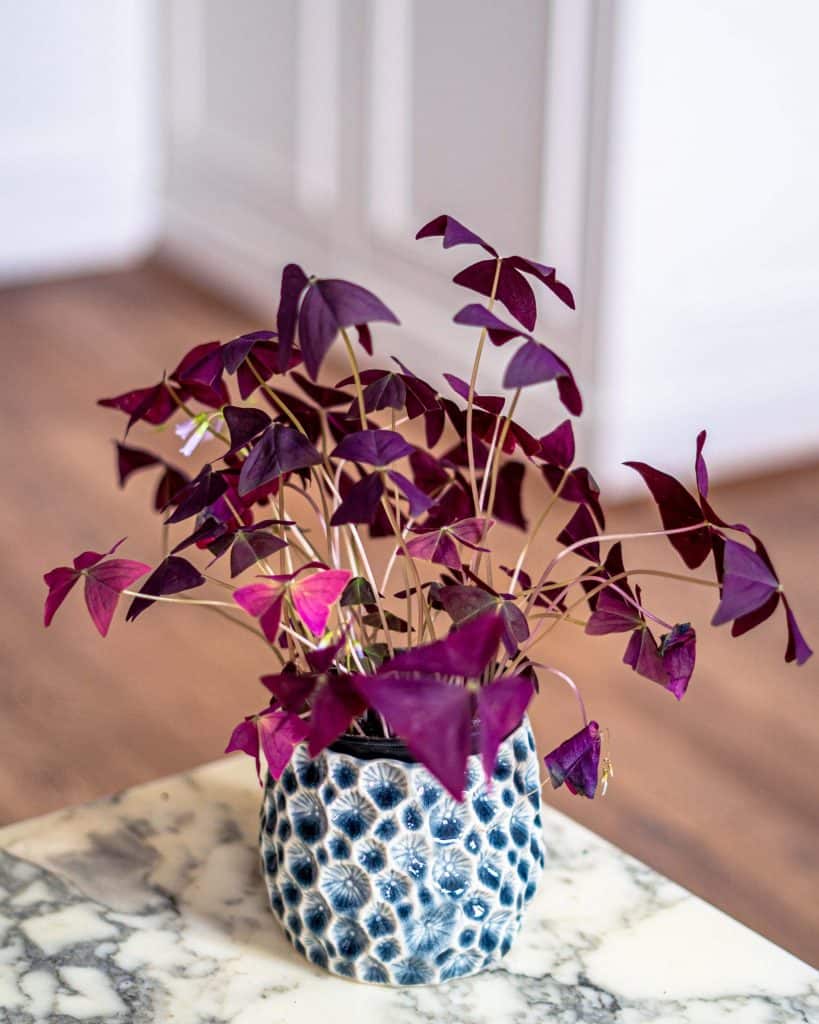 Given the right conditions, the perennial plant will happily grow for at least several years in your home. Native to South America, unlike some indoor plants, it’s also fairly easy to get False Shamrock to flower. The plant is characterised by its three-piece purple/ burgundy leaves and small lilac flowers.

Perhaps most interestingly, much like prayer plants, the leaves change position throughout the day. During daylight hours, the plant will extend its leaves so as to absorb the most amount of light possible.

During the night, the leaves will close in on themselves, making for a cool timelapse video. This phenomenon means that the plant is known as photophilic. If you’re short on space but want a show-stopping plant, then Oxalis Triangularis is a great option thanks to the fact that it only tends to grow from 15 – 30 cm in height and does best when is slightly root bound so does not require a very large container in comparison with how much foliage the plant has. 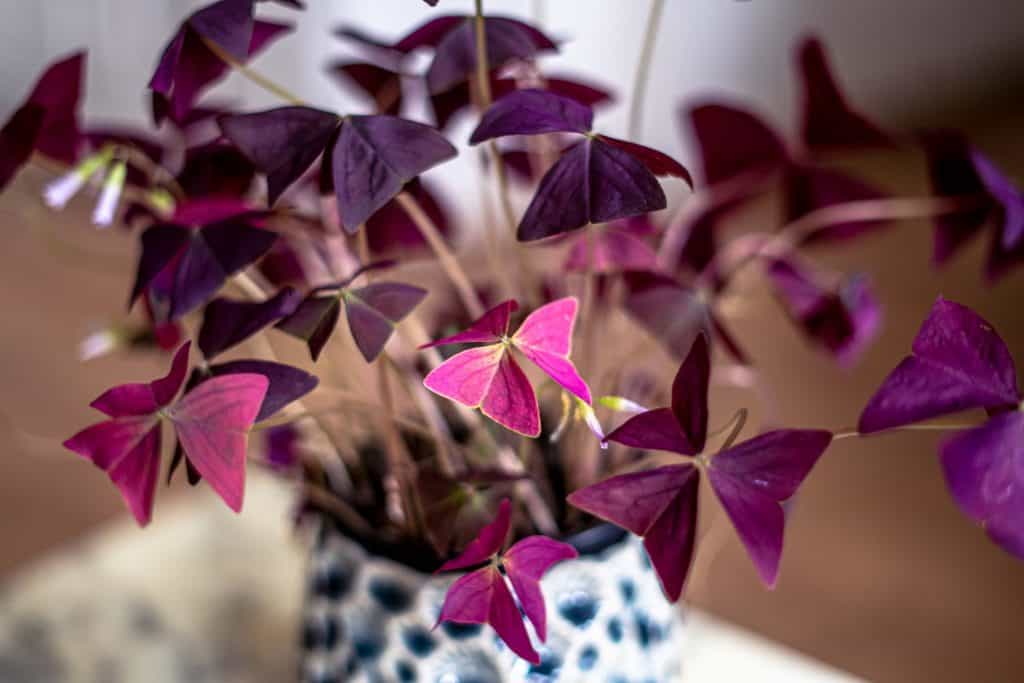 Part of the wood sorrel family, the beautiful stems, leaves, and flowers grow from a tuberous rhizome (bulb). If the plant is not cared for correctly (i.e. it is not watered enough or the plant gets too cold), then though the leaves will die back, the plant tends to survive thanks to its bulb.

Every few years, the plant can also dieback spontaneously during the summer months (which is odd as this tends to be the plant growing season). If this happens, don’t panic and don’t throw the plant away. Instead, hang on to the False Shamrock as it will likely re-grow.

Though it’s fairly hard to burn the leaves of Oxalis Trinagularis, placing the plant too close to the window can lead to the leaves growing towards the light source and sticking to the window. As such, the best position for the love plant is in indirect, bright light, such as a few feet away from an east or west facing window.

The plant needs much more water than many other varieties of houseplants, though root rot can become a problem for the bulbs if watered too often. Typically, you’ll need to water your plant every couple of weeks, and probably even less during the winter months.

Humidity does not really tend to be a problem. If the plant leaves start to become damaged, crispy, or brown, then this is often not because of watering/ humidity levels but instead because of pests. Because of the rapid overturn of foliage and flowers, you’ll want to fertilise your Oxalis triangularis fairly often in the growing season (between every two to four weeks) with a weak fertiliser mix.

Unlike most other houseplants, False Shamrock will do well in a wide variety of soils and substrates and is much less fussy than other indoor plants such as most Calathea varieties. With this being said, Oxalis triangularis should still be grown in a well-draining potting mix with a drainage hole to the base of the pot. 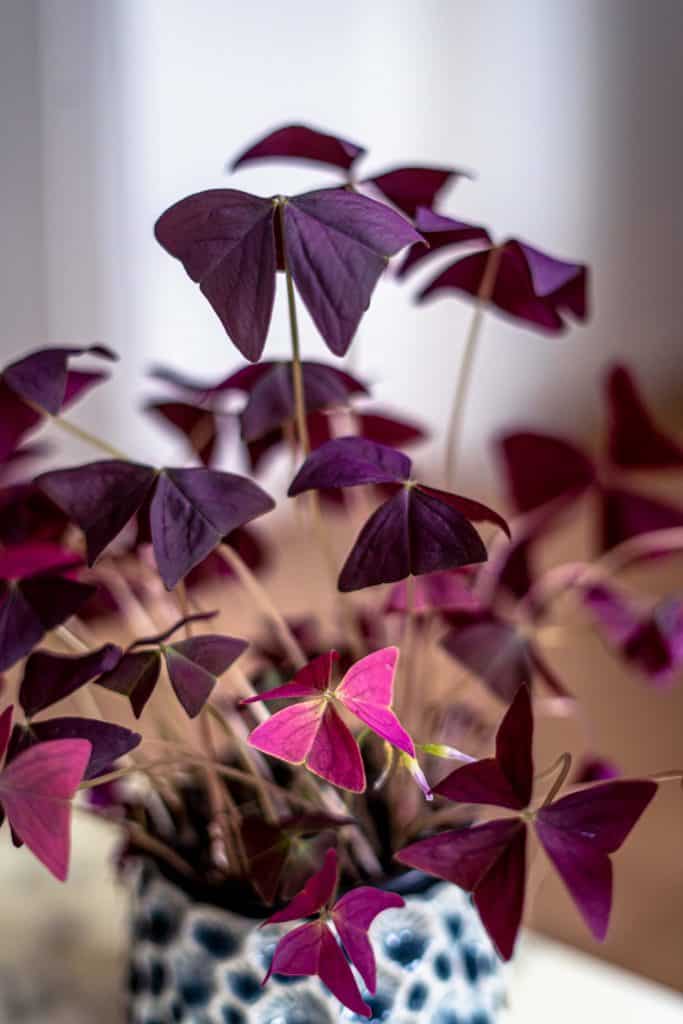 One of the biggest joys of growing the Love Plant is that it is one of the easiest houseplants to get to flower. Depending on what Oxalis triangularis variety you’ve purchased, the flowers will be small and either white, pastel pink, or light purple in colour.

If the False Shamrock is grown in ideal conditions, then the flowers should flower throughout the plant’s non-dormancy period and concurrently with the leaves springing up. The flowers grow fairly rapidly and will flower within a couple of days of growing up out of the tubers.

How to Propagate False Shamrock

If you’re indoor gardening and have your plants close to one another, then you might well discover why Oxalis Triangularis is often referred to as a weed. After all, the plant spreads through corms (bulbo-tuber) which spread fairly easily.

The easiest way to propagate the Love Plant is by replanting the corms during the growing season (spring and summer) into well-draining potting soil and waiting for new stems and flowers to grow. Alternatively, the plant can also be propagated via division, which means separating the plant at the roots during repotting.

You should note that at least every year or so, your Oxalis triangularis plant will go into a period of dormancy. During this time, the plant will stop producing new stems and flowers and all of the current ones will die back.

Don’t be alarmed as this dormancy period is completely normal for the plant! You should also not assume that your oxalis has died as it has likely just gone into a rest period. The first sign that your plant is about to enter its dormancy period is that the plant will stop flowering and those leaves which remain will start to look sad and droopy.

If you choose not to do anything, the plant will die back naturally, and you can remove the dried up leaves. Alternatively, you can cut the plant back. Once your plant appears as if it has reached its dormancy period, you should stop watering immediately, so as to prevent root rot.

The plant will then lie dormant for a period of a few weeks to a few months before starting to grow back. Typically, Oxalis Triangularis will grow quickly during the summer, before slowing down in the autumn, and entering a period of dormancy during the winter.

However, this is not always the case, and my mum’s plant actually experienced a dormancy period over the summer! Once the plant has sprouted new leaves, you can resume the plant’s usual watering schedule.

My False Shamrock has completely died back!

Though many people think that their plant has completely died when all of the flowers and stems completely die back, this is often not the case. Instead, the plant has likely gone into a period of dormancy. Follow the Oxalis triangularis dormancy steps listed above so as to ensure that your plant is cared for in the best possible way.

Enjoyed reading about how to care for Oxalis Triangularis? Pin this article now, read it again later: 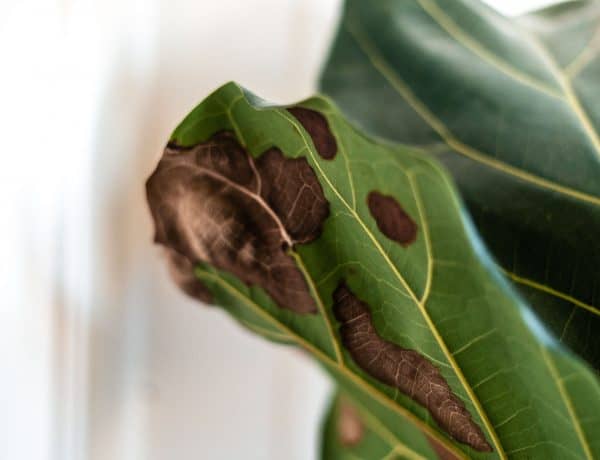 Why is my Fiddle Leaf Fig Getting Brown Spots? 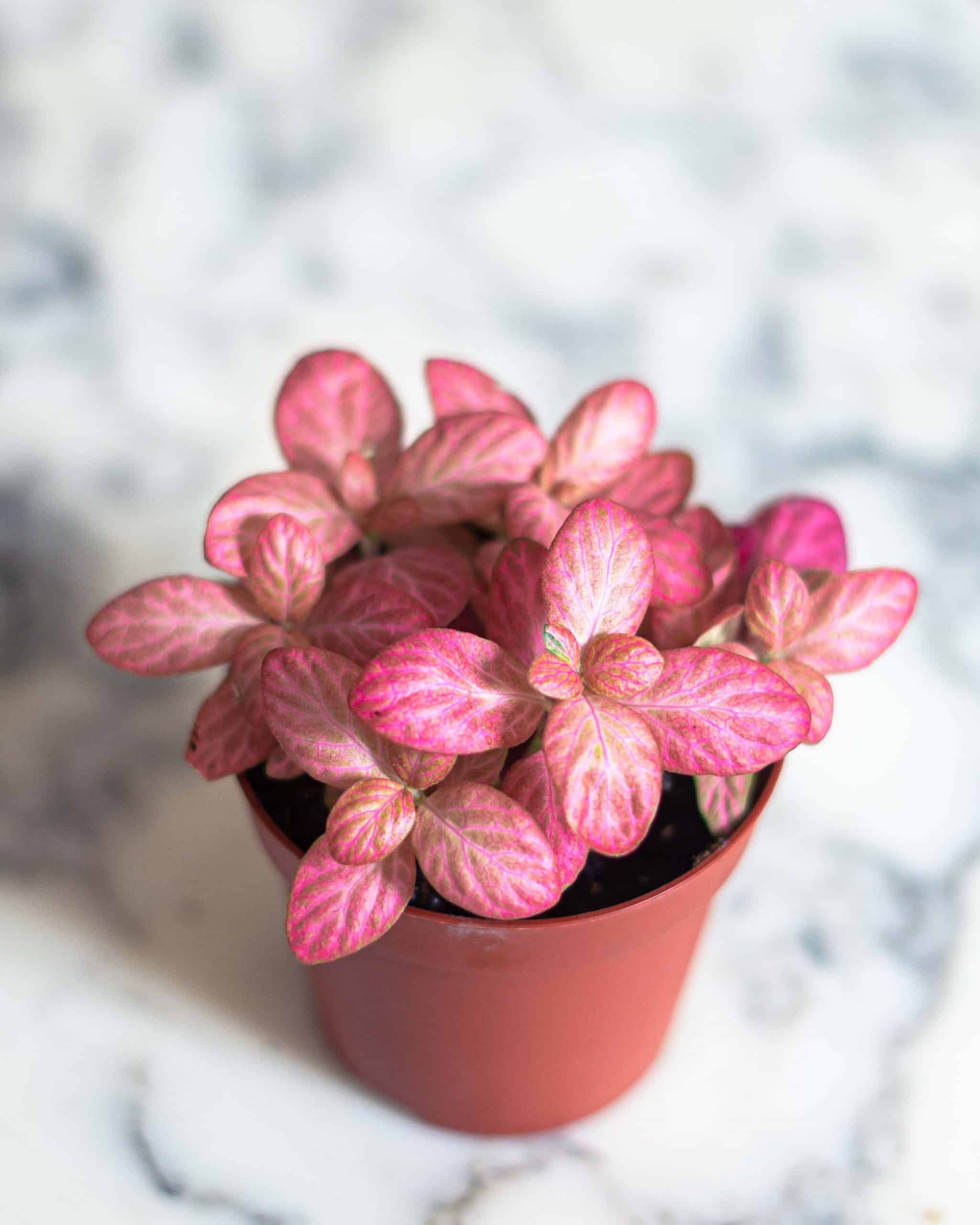 Pink Plants You’ll Love (Which Will Brighten up Your Home!)

Pink Plants You'll Love (Which Will Brighten up Your Home!)