One of the most beautiful prayer plants with particularly unique foliage is that of Calathea musaica, which is known scientifically as Goeppertia kegeljanii. Characterised by its beautiful mosaic-like appearance on the foliage, the plant is sometimes known as Calathea ‘network’ thanks to its intricate leaf patterns. Here’s a Calathea Network care guide, including propagation tips, the best watering method and common problems that this prayer plant faces. 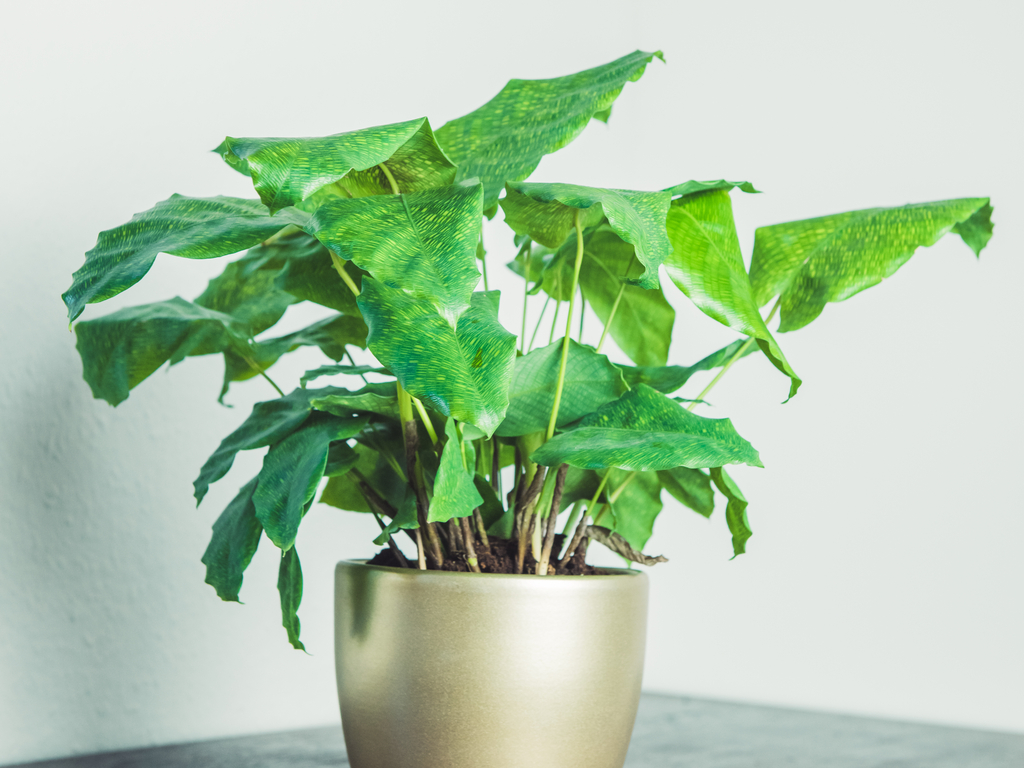 Please note that, in recent years, the plant has been reclassified as Goeppertia kegeljanii “Network”. However, many plant stores and guides still refer to the prayer plant as Calathea musaica. The plant is still in the Marantaceae family and is a ‘prayer plant’ because its leaves are photophillic, meaning that they react strongly to the light and move up and down depending on light levels and the time of the day.

Like many types of Calathea, the Network plant has a whole host of nicknames. Some of the most common ones include Calathea bella, Maranta bella, Calathea ‘Network’, Maranta tessellata, and Network Prayer Plant.

Calathea musaica is native to Brazil and other parts of South America. Its leaves are dark green  and glossy and are covered in a light green ‘network’ pattern of lines. Unlike other Calatheas, the underside of the Network Calathea leaves are not maroon but also green. 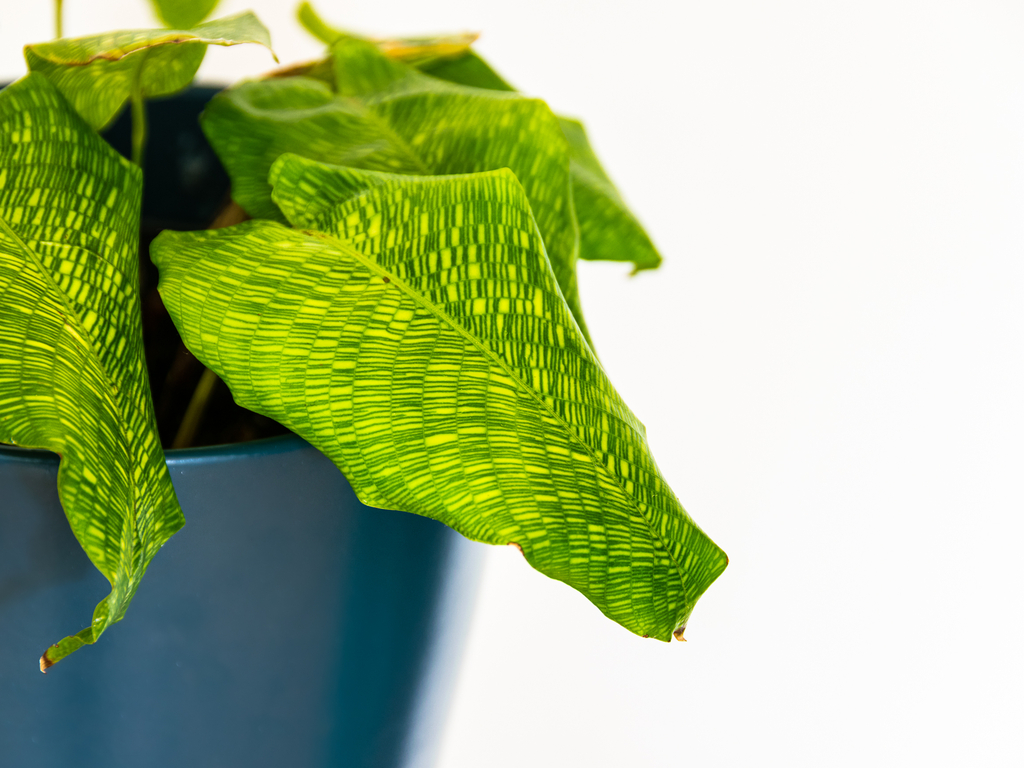 You should know that Calathea musaica is not that rare and can fairly easily be found in most big box plant stores, as well as smaller independent boutiques. Though rarer than some Calathea varieties such as Calathea ornata or Calathea roseopicta, and thus meaning that it will likely cost you more, you shouldn’t have too much trouble locating this beautiful indoor plant. 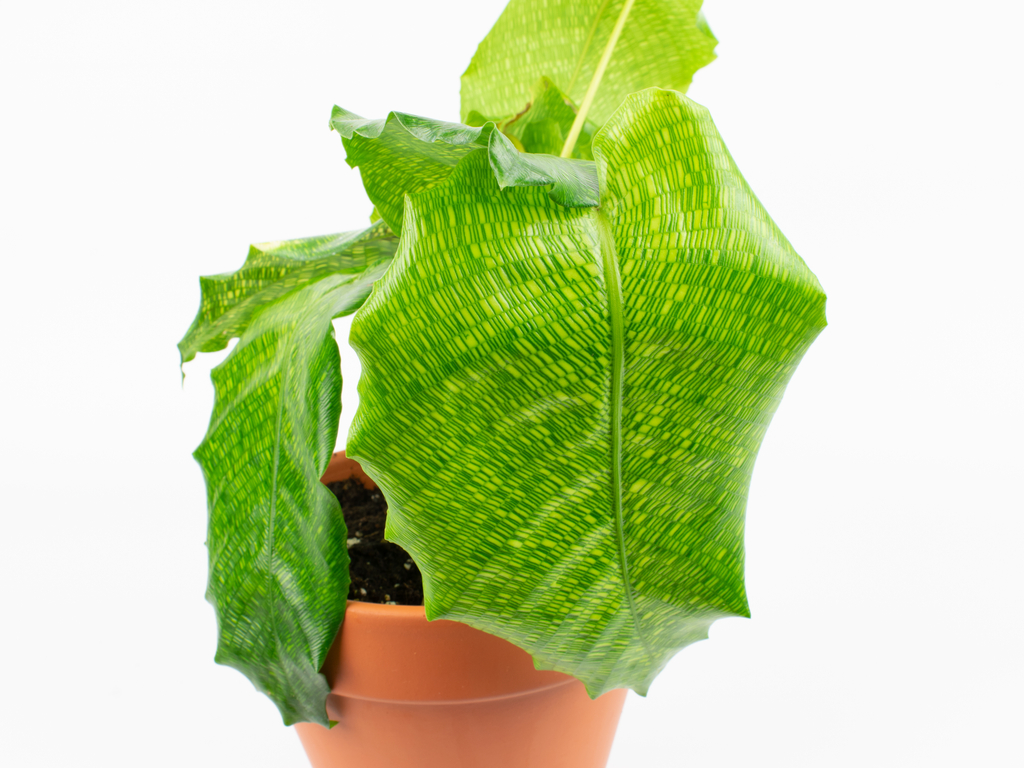 Light levels for the Calathea musaica

It’s a common misconception that Calatheas are low light plants. Although they do not like bright, direct sunlight as this can cause the leaves to get sunburn, from which they will not recover, the Calathea musaica will do best in bright, indirect light, such as a few feet away from a window.

If the plant is getting too little light, then you might notice that new leaves are coming in with less vibrant patination. If this occurs, then be sure to move the plant to a brighter area as soon as possible. In rare cases, discolouration of the leaves can also mean that the plant is receiving too much bright sunlight.

Prayer plants are notoriously difficult to keep healthy due to their tendency to be fussy over watering conditions. Luckily, the Calathea Network tends to be a little easier to care for than many other Calatheas, but will still require care and attention when it comes to water the plant.

Calatheas don’t like to dry out between waterings and like to be moist at all times. One of the fastest ways to tell that the plant is not receiving enough water is if the edges of the leaves start to curl up.

With this being said, Calatheas don’t like to have their feet sitting in too much water as this can lead to root rot, from which there is little chance that the plant will recover. As such, the best method is to water the Calathea musaica little but often.

This calathea prefers distilled or filtered water as its leaves have a tendency to react poorly to many compounds and minerals in tap water such as fluoride and chlorine. These compounds can cause the leaf edges to go brown and crispy.

If the leaves get brown and crispy after prolonged exposure to tap water, then you can cut off the ends of the leaves with a clean pair of cutters and it shouldn’t harm your houseplant. To learn more about this, check out our guide for what to do if my Calathea leaves are turning brown. 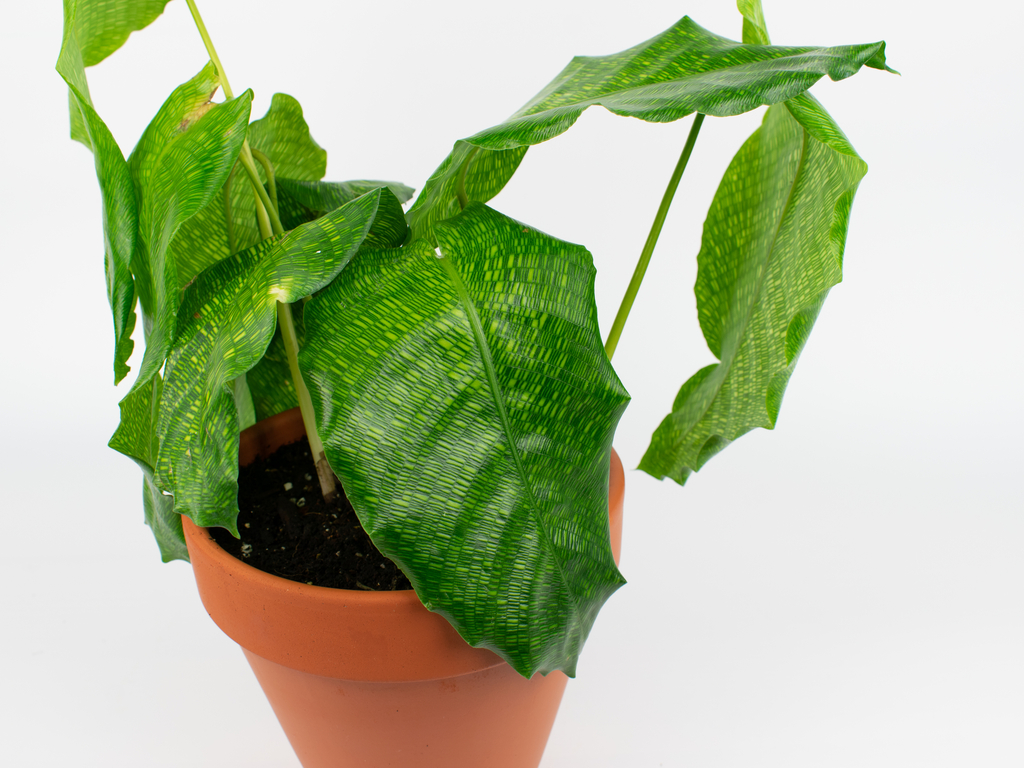 The other main reason for browning edges on your Calathea edges is a lack of humidity in the space where you’re growing the plant. This is of particular concern during the winter months when central heating can really dry out the air in your home.

There are a few ways to combat humidity issues with Calatheas. One of the simplest ways to increase humidity for the plant is to group similar plants together. Just don’t do this when the plant first arrives in your home in case it has pests. It’s best to isolate new plants in case signs of pests appear on the plant in the first few weeks.

You can also mist the plant every few days. Luckily, the Calathea Network is a little more forgiving of lower humidity levels than other prayer plants. With this being said, you want to ensure adequate humidity levels so that the plant will grow at its optimum (and fastest) rate.

Like most houseplants, the Calathea Network plant should be planted in well-draining soil. Though there is no prescribed mix per se, the substrate should contain a mix of well-draining mix such as sand or perlite, as well as organic material.

Unfortunately, unlike many succulents and aroids, the Calathea musaica cannot be propagated via a stem cutting placed in water. Instead, propagation is through division whereby the plant is divided at the roots into several plants during the start of the growing season (i.e. in the spring and summer).

Like most other Calatheas, the plant will rarely bloom indoors as it is hard to replicate the conditions that the Calathea musaica needs to flower. With this being said, if your plant does end up flowering, then the resulting blooms are not very exciting. Small white flowers will bloom on small stalks directly from the rhizome and will only last for a week or so.

Common problems and pests of the Calathea ‘musaica’

One of the most common plant pests that plagues the Calathea musaica is that of spidermites. The plant becomes particularly susceptible to them when it is under stress, such as when it is not receiving enough water.

Unfortunately, spider mites tend to be one of the hardest houseplant pests to get rid of, and I’ve personally lost several indoor plants to this tricky pest. The easiest way to treat spider mites is to first run the plant under a faucet, or even by bringing it into the shower. Then, treat the affected areas with neem oil and carry on with this process a couple of times a week for at least several weeks. 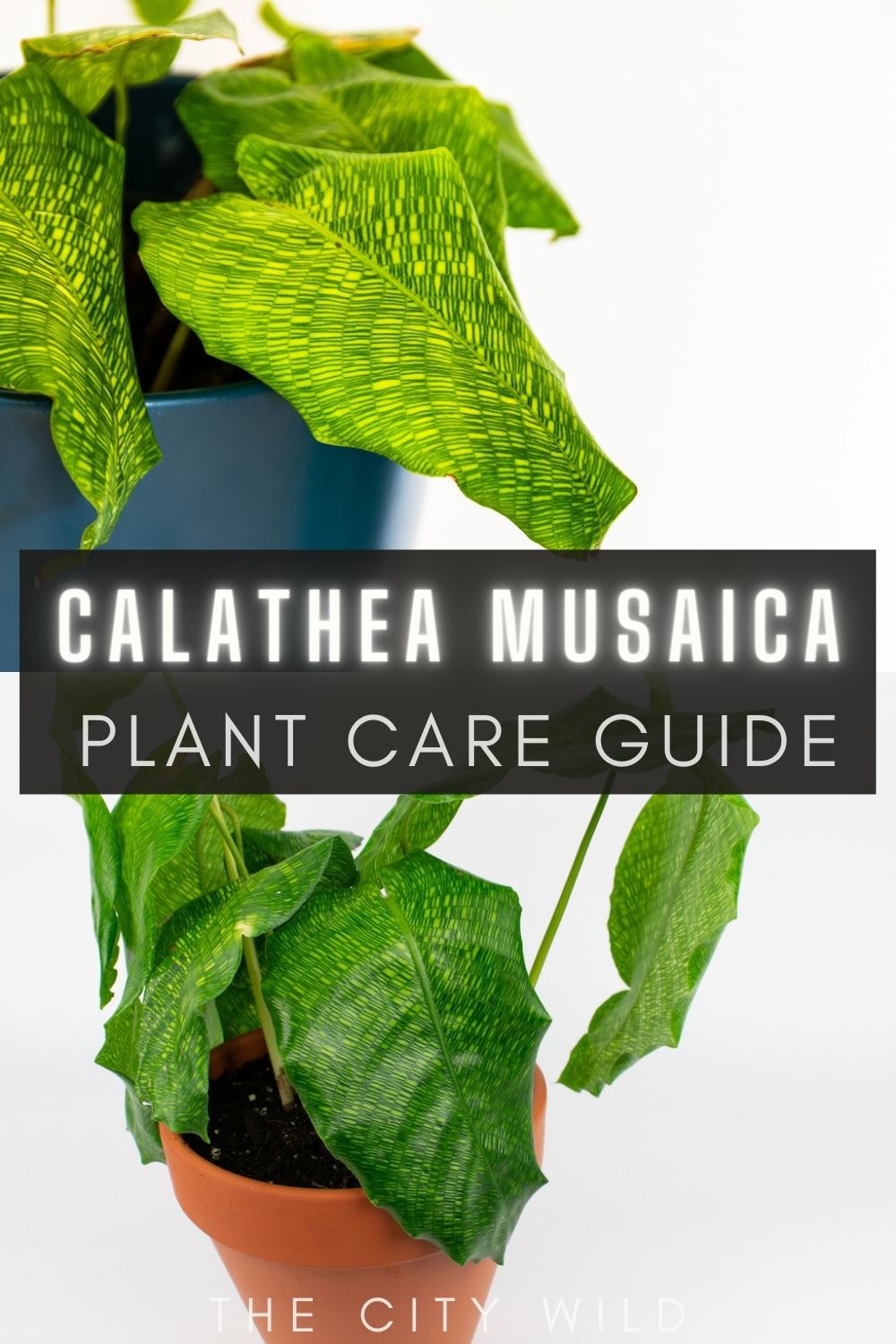 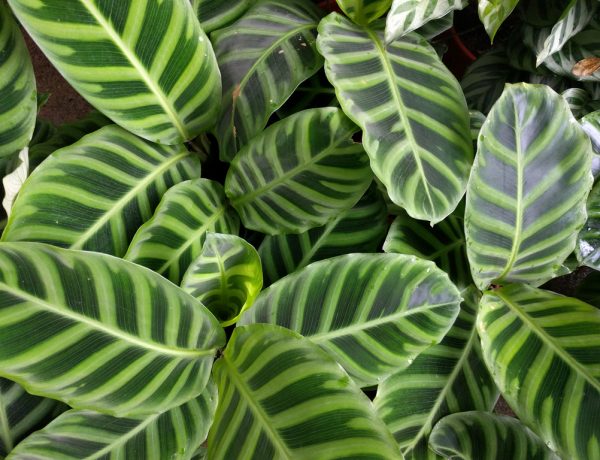