If you’ve landed on this article wondering whether you have a Caladium (Caladium bicolor) or a Syngonium (Syngonium podophyllum), then you’ve come to the right place. After all, the two species of plant look pretty similar and are easily confused if you don’t know what you’re looking for. Here’s your ultimate guide to Caladium vs Syngonium, including the top differences and similarities between these two plants. 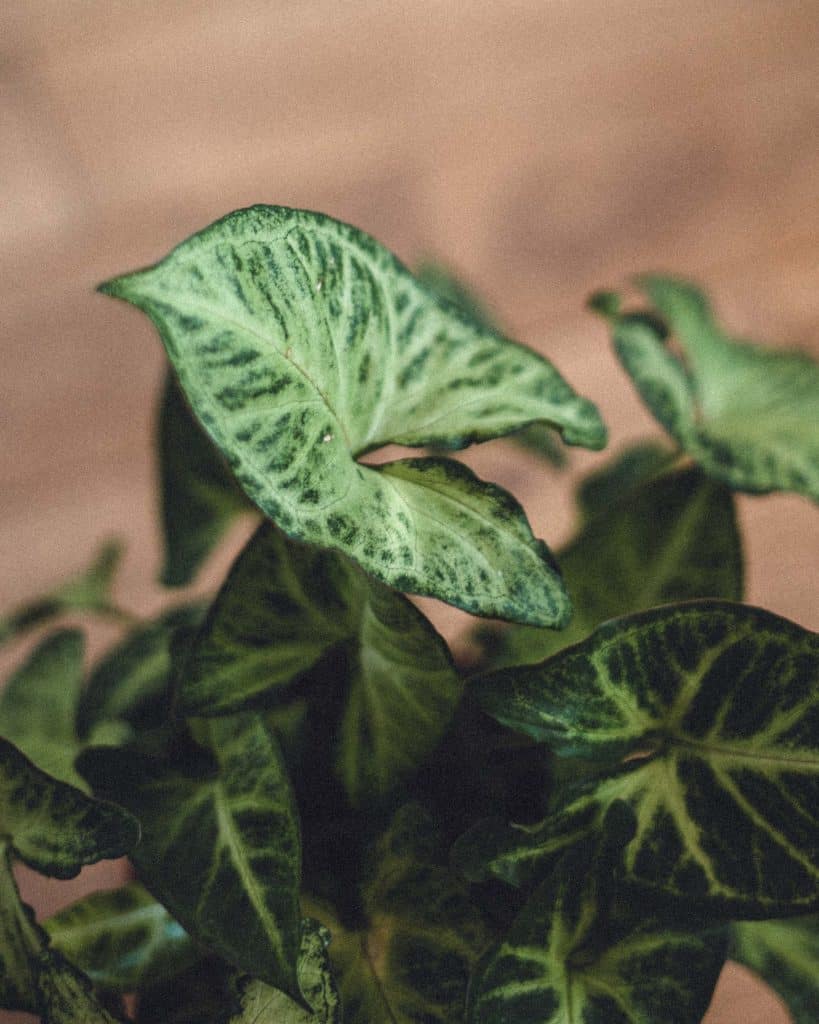 Are Caladiums and Syngoniums the same plants?

The short answer is no. Caladiums and Syngoniums fall into different taxonomies. With this being said, both plants are part of the same family, Araceae, which is why they’re pretty similar in appearance.

While Syngoniums are often nicknamed goose’s foot, five fingers, and arrowhead vine, Caladiums sport nicknames such as Elephant Ear and the Heart of Jesus. Both plants originate from tropical conditions in Central America and South America and so both plants enjoy fairly high humidity levels. Syngoniums and Caladiums, like Philodendrons are aroids. 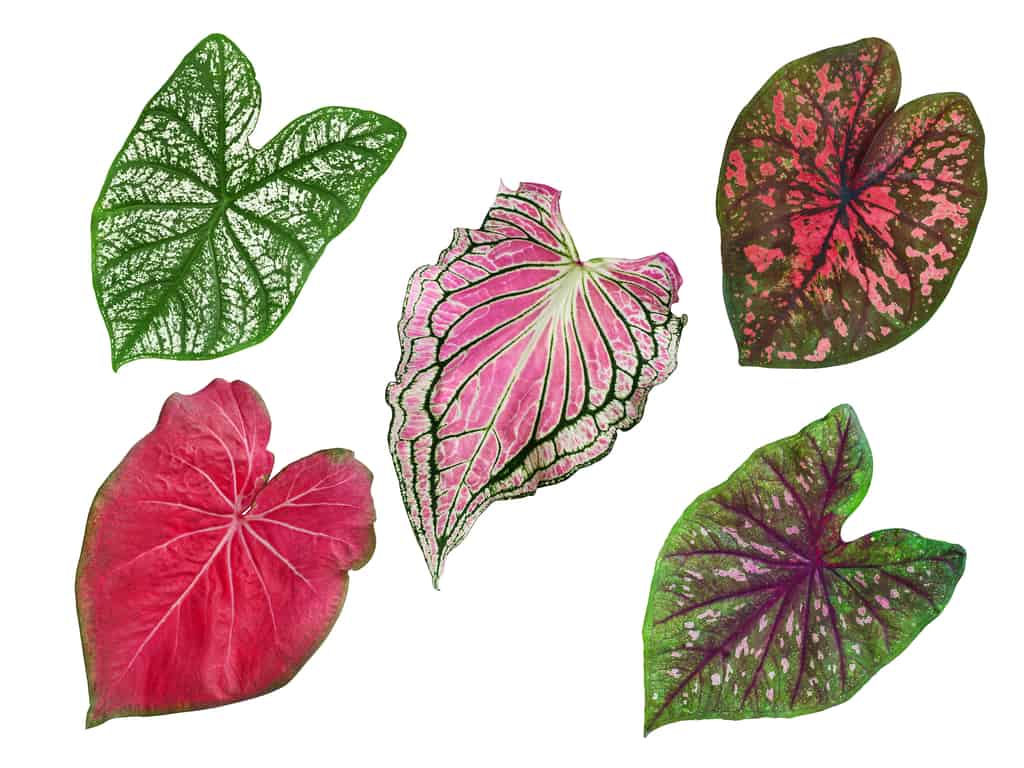 Leaf shape of Caladium vs Syngonium

Caladiums and Syngoniums often have incredibly similar looking leaves, which is the main reason that people find it difficult to tell them apart. However, while the Syngonium is often referred to as the arrowhead plant on account of its arrow-shaped leaves, some varieties of Caladium don’t necessarily have to have arrow shaped-leaves.

Instead, Caladium leaves come in a variety of different shapes and sizes depending on the type, some of which are so rounded that they can be confused with Begonias if someone is unfamiliar with the various plants. Caladiums tend to have brighter and more vibrant leaves than those of Syngonium plants.

Instead, they rarely reach more than 30cm in height and are more likely to spread in width. Conversely, Syngoniums are vining plants, which means that they will do well when grown up a moss pole, for example.

Propagating via cuttings or division

Caladiums tend to enter a dormancy period during the early autumn when the leaves of the plant will drop off al the plant will die back to its tubers only. This is the best time to divide the tubers and repot them into different containers.

Syngoniums can be propagated at pretty much any time of the year, though the best time is the growing season (spring and summer) when the cuttings are likely to root faster. All you need to do is to find a node (a little bump on the stem part of the plant) on the vine below several leaves (ideally at least two).

Cut just below the node and place the cutting into water. Change the water out every week or so for around a month. During this time, roots will form in the water. When the roots are at least several inches long, pot up the rooted cutting in a new container with well draining soil. When potting up the plant, be sure not to overwater the newly potted cutting as the small root system is prone to root rot.

Growing Caladiums and Syngoniums: Which is easier?

If you’ve now deduced exactly what your house plant is, then the good news is that both Syngoniums and Caladiums are easy to care for. With this being said, as Caladiums grow from tubers, they do not normally start sprouting until the air temperature is at least 20 Celsius. 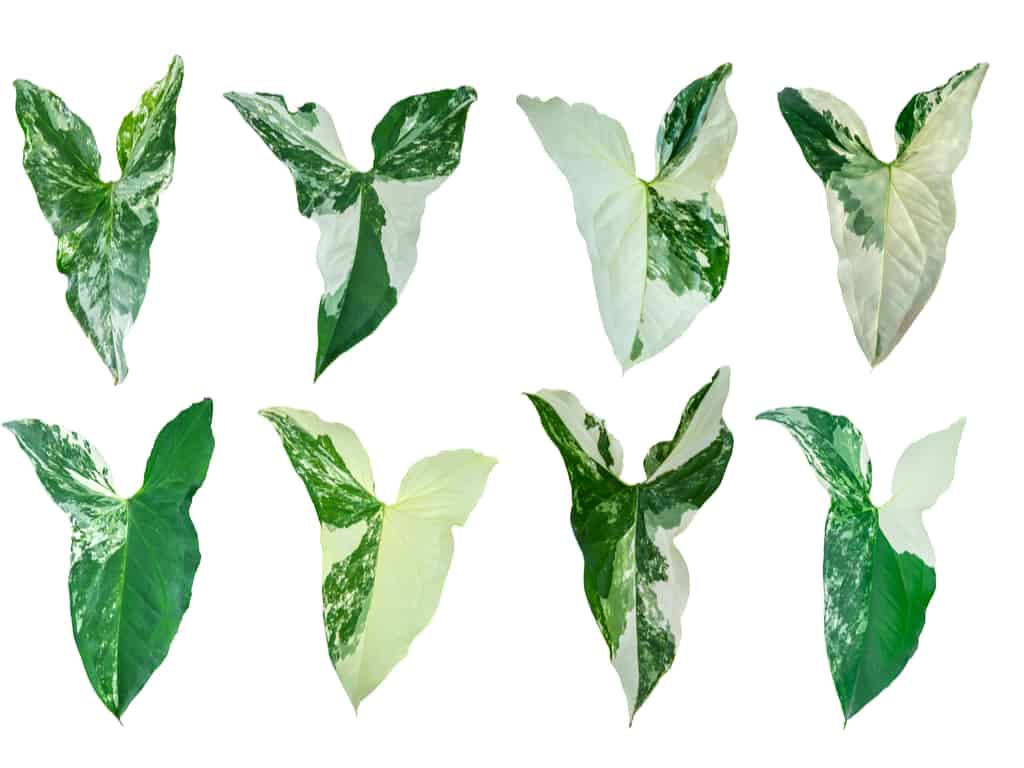 Given that Syngoniums will vine at slightly cooler temperatures, Caladiums can end up being a little trickier to maintain for than their arrow-leaf counterparts. Furthermore, Caladiums are much more sensitive to light conditions and their leaves will easily burn if left in too much bright direct sunlight.

If your leaves start to burn, then move the plant to a more shaded area immediately. Unfortunately, there is little chance of recovery for the leaves which have already burnt. Both plants do well in shadier spaces in your home, though will still need bright indirect light in order to thrive and grow at a normal pace. If you notice the new leaves of either species of plant are not as vibrant, then this is a surefire sign that the plant needs to be moved to a brighter spot.

Enjoyed reading about the differences between Caladiums and Syngoniums? Pin this article now, read it again later: 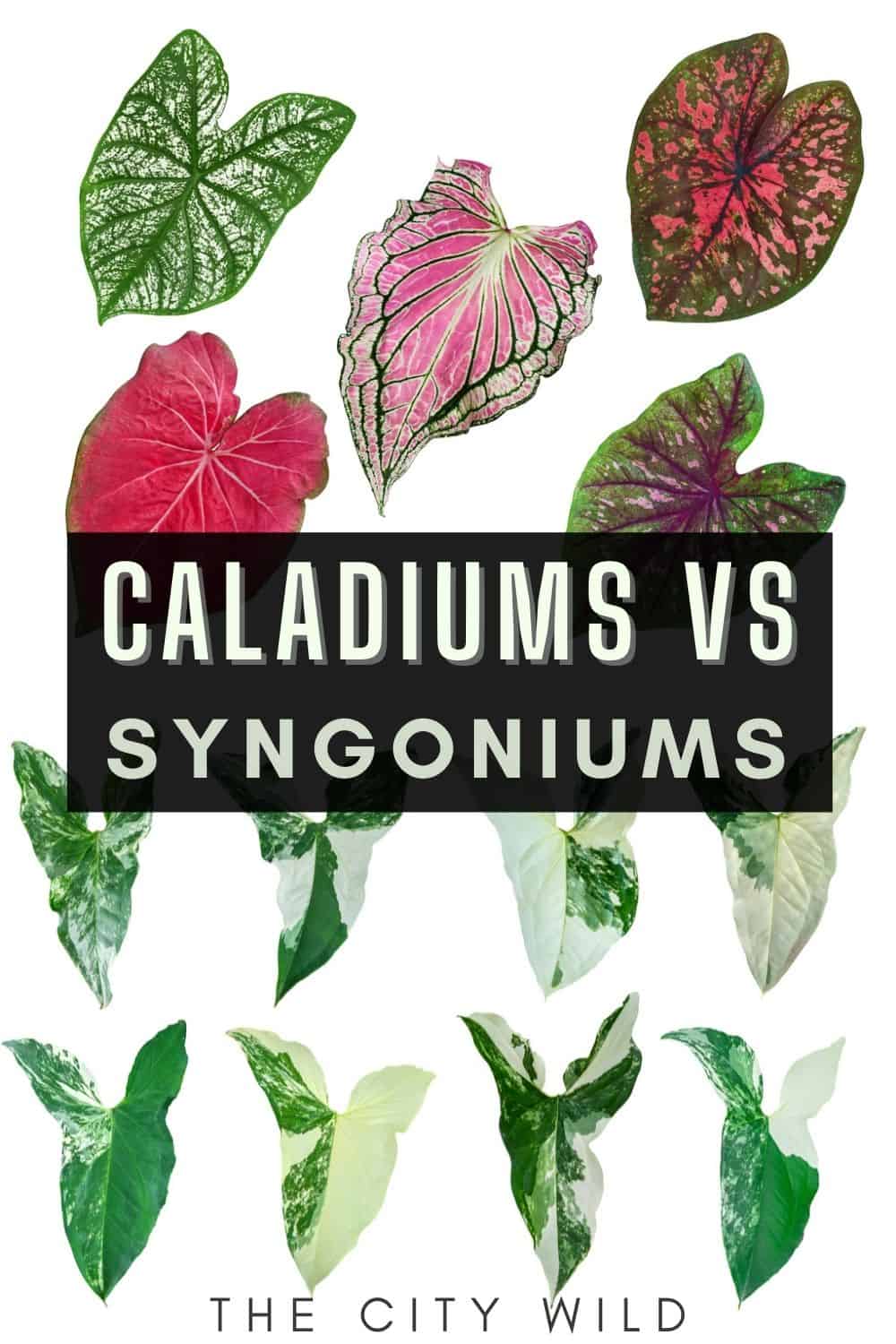 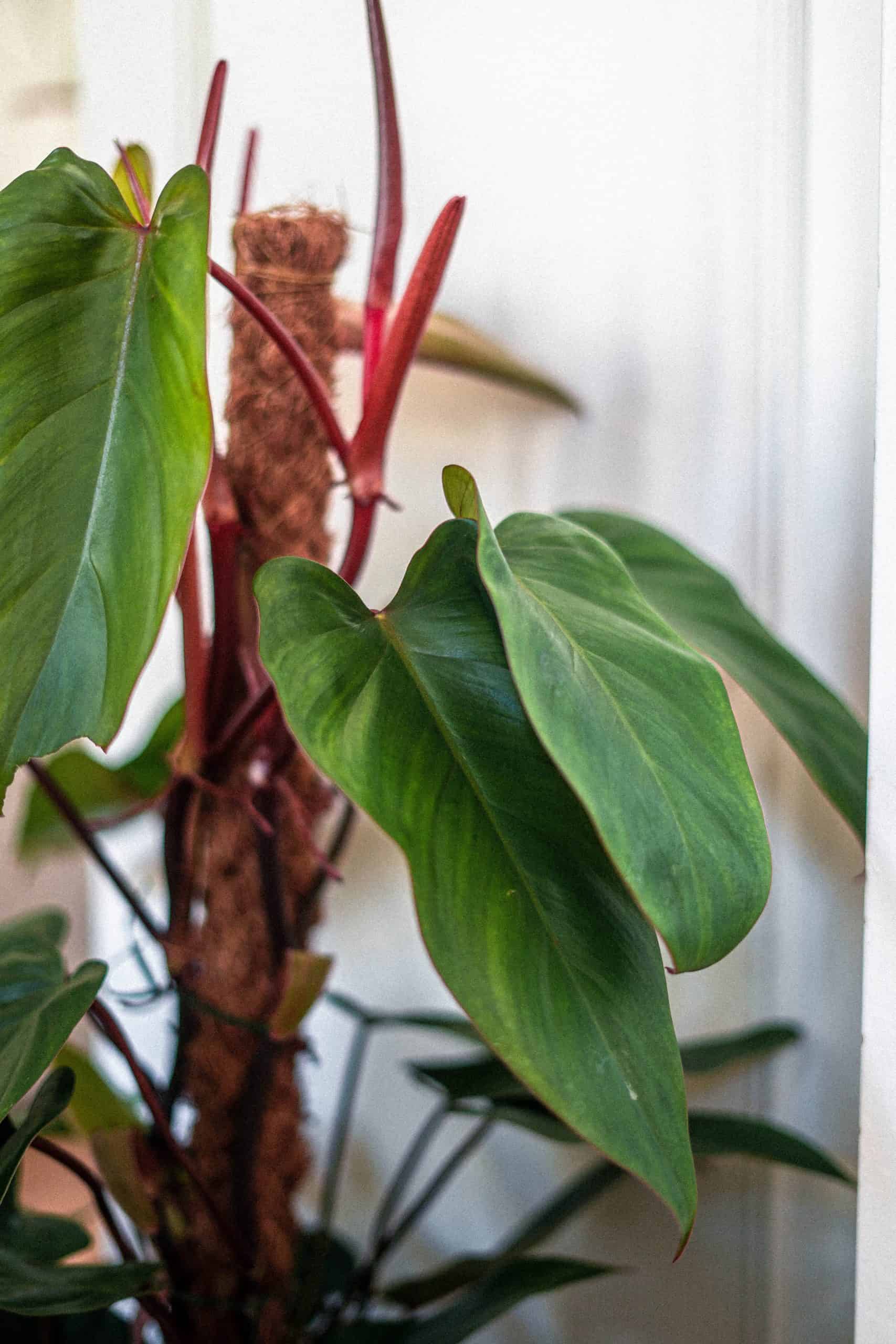 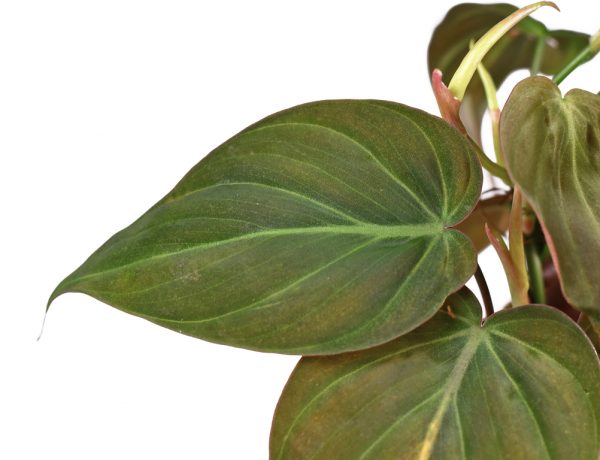 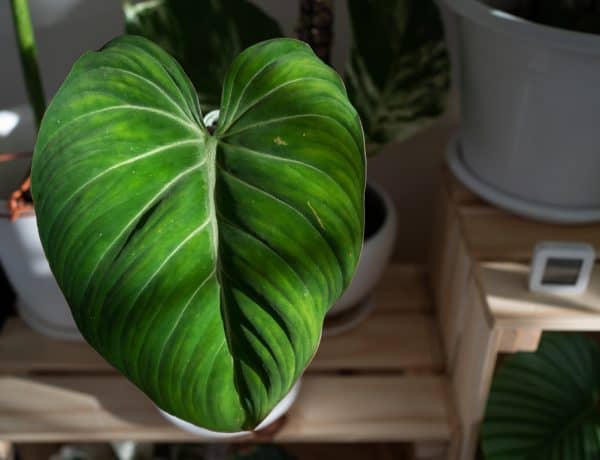